1. The CHS(Cylinder,Head, Sector) of start sector/stop sector of a partition is ignored for modern hard drives. The Head field occupies 1 byte which can represent a max #255 header. The Cylinder field occupies 10 bits which can only represent #3ff(i.e.,#1023 in decimal) cylinder at maximum. The Sector field uses 6 bits and the maximum sector number it can represent is 63. Note that Cylinder number and Head number counts from 0, while Sector number counts from 1. The maximum sector number CHS can represent is #1023 cylinder, #255 head, #63 sector. Considering the fact that the sector size is 512 bytes in most cases, the maximum byte offset(counting from 0) of the last byte of the stop sector of a partition is 1024*256*63*512-1=8,455,716,863(~8GB). While modern hdds are far larger than 9GB, the start/stop CHS of a partition located beyond 9GB cannot be represented by CHS. But why the capacity limit of MBR hard drives is 2TB, not 8GB? That is because there are two additional fields: start LBA/sector number in the partition table entry. You can set the addressing mode of a hard drive to LBA(logical block addressing) in BIOS. Sectors of a HDD will be numbered from 0,1,…, to the last sector of the HDD. The start LBA is the sector number of the start sector of a partition; the sector number is its size. Considering both start LBA and sector number occupy 4 bytes, the maximum start LBA/size is 0xffffffff(‭4294967295‬) sectors,‭i.e.,2,199,023,255,040‬(2TB) in bytes. You may say the max stop byte offset of a partition can be (‭4294967295‬+‭4294967295‬)*512-1=4,398,046,510,079 so an MBR disk can be as large as 4TB. But in reality, the variables to store the address of a byte in an MBR partition are 4 bytes also so they can not address a byte beyond 2TB. This is the reason why MBR partition can not handle with HDDs larger than 2TB.

4. The sector number field does not matter for the partition table entry with system type 0xf or 0x5 . Those partition table entries are just used to link the EBRs together using the start LBA field. The actual size of logical drives is represented in the corresponding entry in EBRs. Note that the logical drives are not necessarily adjacent to their EBRs. But in practice, they are usually aligned at the beginning sector of the next track to their EBRs or the beginning of next page(a page is 2048 sectors), i.e., the gap between the beginning of logical drives and their corresponding EBRs is typically 62 sectors or 2048 sectors. The piece of HDD space from the EBR to the end of the logical drive the EBR describe is called inner extended partition, and the size of this piece of HDD space(the size of logical drive plus the size of the gap) is put as the sector number field for the inner extended partition, although the value is not important. All the sizes of inner extended partitions are summed up and put as the sector number field of the partition table entry for the primary extended partition, which does not matter as well.

Raw hard drives should be partitioned and formatted to use. When you use a hard disk partitioning software, you may be confused about some concepts such as primary partition, extended partition, logical disk. All partition managers assume you know well about these concepts before partitioning a hard drive. This is unfair to most users because all they want to do is partitioning the hard drive into several sub-parts(volumes) which have no difference among them except the size. Moreover, most partition tools follow the following steps to create partitions: select the “create new partition” option, specify the size, type(primary partition, extended partition, etc) of the partition (some partitioning software even ask you to specify the start/stop cylinder of the partition. Cylinder? Do you know what on earth it is?), then click “ok” to create a partition. Then follow the same step to create another partition. This is not what we do things usually. The most efficient way to do things conforms to a top-down strategy. As to hard disk partitioning, we would like to first have a big picture of what we gonna do, that is, specify how many sub-parts(volumes) you need for the hard disk. Then we may fine-tune each volume such as adjusting its capacity, type, etc. Bearing all the above considerations in mind, we developed PBD(Partition Bad Disk), an easy to use partition manager. Although the main object of this partitioning software is to isolate bad sectors from created partitions, it can be used as an ordinary but handy partition tool that has overcome the disadvantages mentioned before. In the following example, we use PBD to partition an external hard drive into four volumes. 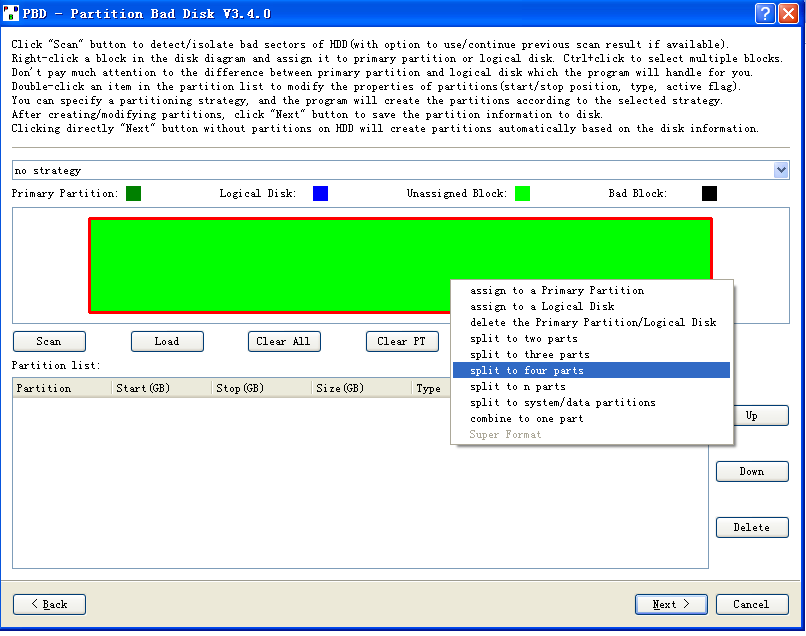 The hard drive is then split to four parts. 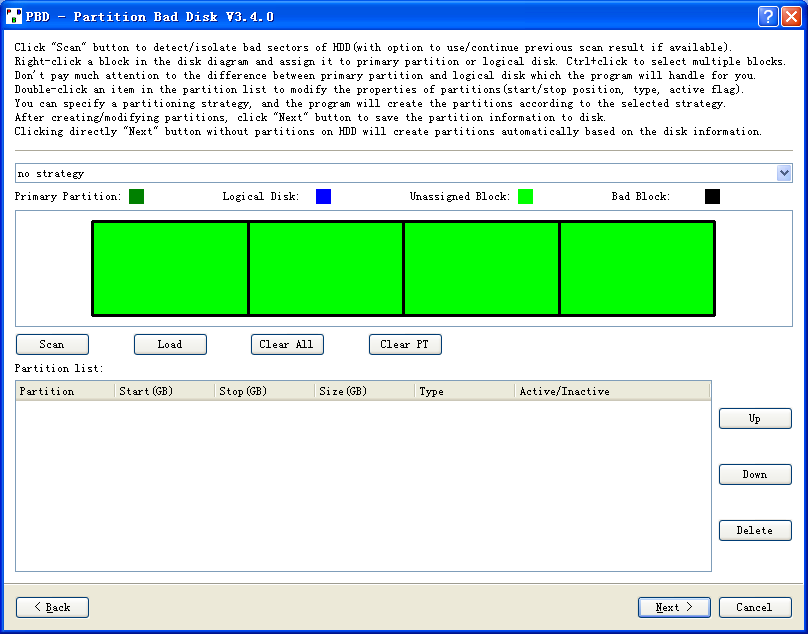 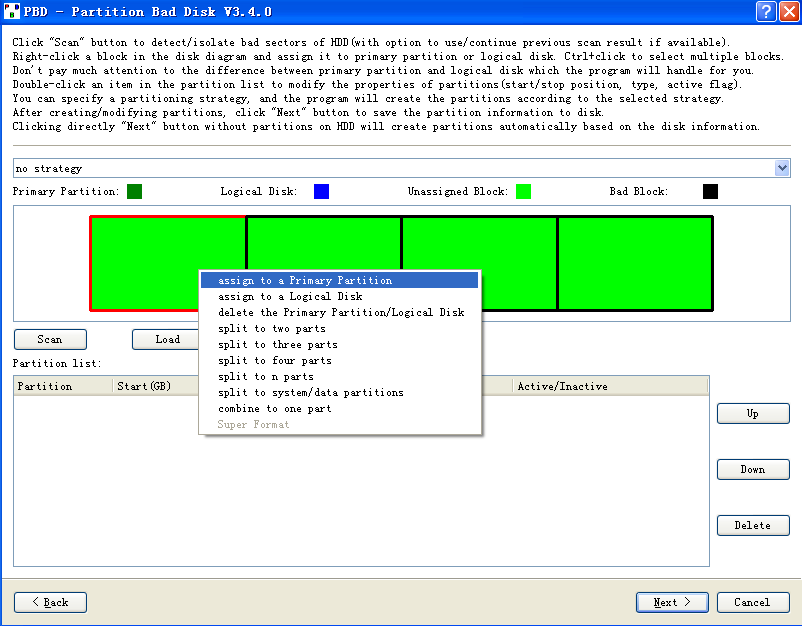 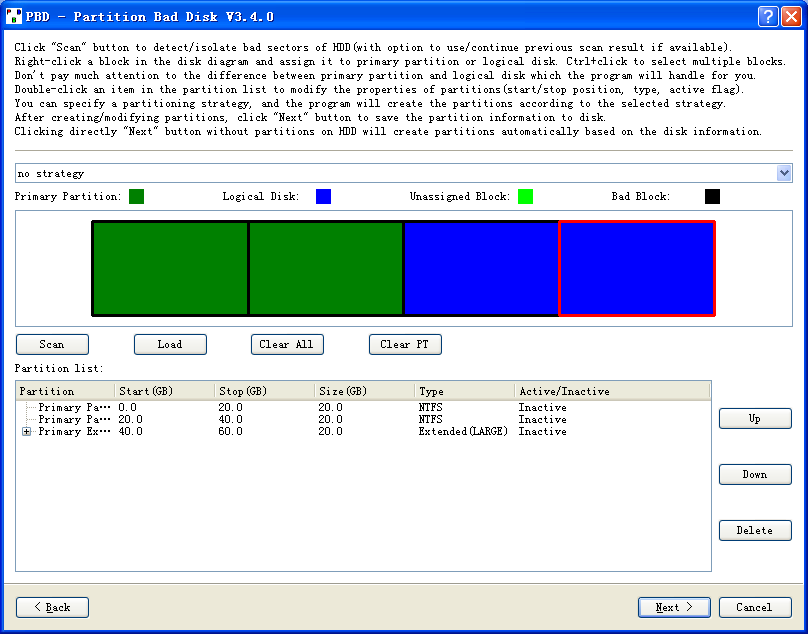 You can adjust the properties (such as size) of these HDD partitions in the partition list below. 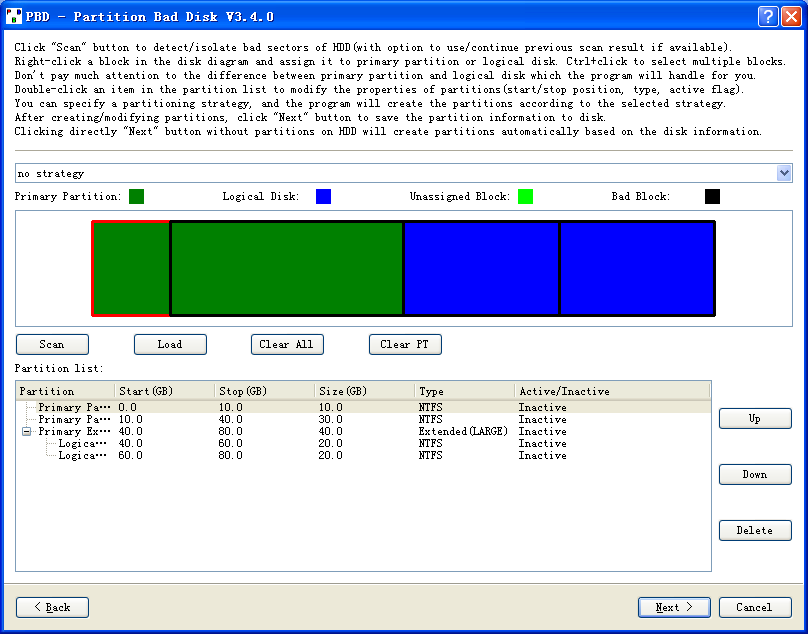 Ok, it is almost done! Just click “Next” button to save the results to the hard drive, and you will see the new volumes in Windows explorer immediately.

There are quite a few Windows clipboard alternatives in the market. But most clipboard managers are hard to use. Typically, these clipboard software have a dazzling GUI with many buttons or menu items that confuse even a software engineer. Most of their functionalities are those you will never use, and the important functionalities you really need are missing. For example, many clipboard software can only deal with text. Another problem of these clipboard managers is they are not easy to use. I mean how many mouse clicks/keyboard strokes you need to copy/paste an item? I saw some clipboard managers use Ctrl-VVV… to paste previous copied items or use complex key combinations to copy/paste, which is a hard task for ordinary people except you have very flexible fingers. Quick Multi-Copy was developed from the beginning with the ease of use bearing in mind. No dazzling GUI, no complicated settings. You copy/paste as you did in the past. Quick Multi-Copy will automatically store you copied to its clipboard. If you need to paste an item that is not the latest one, just hit one key(F1-F10 for ten previously copied items respectively). This is the clipboard manager that uses the least number of operations to do its job. And the clipboard of Quick Multi-Copy can contain any type of content including text, images, files, etc. The content of the clipboard is shown in its GUI for you to view and manage conveniently.